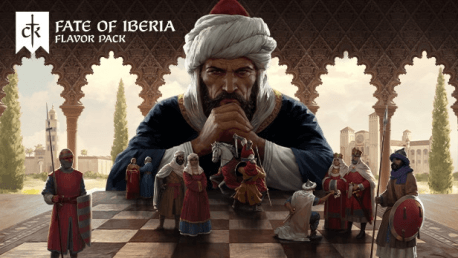 The sun-kissed lands of Iberia await your glorious rule with  Crusader Kings III: Fate of Iberia  flavor pack. Deeply rich in history, culture and people, the peninsula’s medieval destiny is ready to be shaped by your majestic hand, be it clad in conciliatory velvet or as an iron fi...

The sun-kissed lands of Iberia await your glorious rule with Crusader Kings III: Fate of Iberia flavor pack. Deeply rich in history, culture and people, the peninsula’s medieval destiny is ready to be shaped by your majestic hand, be it clad in conciliatory velvet or as an iron fist.

The new major multi-stage Struggle feature lets you decide on the fate of a lively and complex region across realms and cultures. Be the one to unite Iberia under a single banner, or watch as conflict marks generations to come.

From the Christian kingdoms in their northern mountain strongholds to the sumptuous Muslim taifas of al-Andalus, immerse yourself in Crusader Kings III: Fate of Iberia with all its splendor and art. Breathe life into your Iberian adventure with new events, music, traditions, models, and style your ruler as a royal Castillian knight or dashing Umayyad emir.

The Fate of Iberia lies in your hands
“The Struggle” is an expansive new feature found in Crusader Kings III: Fate of Iberia, simulating multi-stage, large-scale conflicts across decades, or even centuries.

Embrace the uniqueness of Iberia
Step up and discover an Iberian peninsula brought fully to life, with new art, music, models, costumes and characters, events, and more.

How does it work? Will I receive Crusader Kings III: Fate of Iberia as a physical copy?

What does Crusader Kings III: Fate of Iberia contain? Will I receive the same content as on Steam?

You will receive Crusader Kings III: Fate of Iberia, which is an expansion pack that requires the base game on Steam.

Yes, this product key gives access to Crusader Kings III: Fate of Iberia as a digital download for Steam on both PCs and Macs.