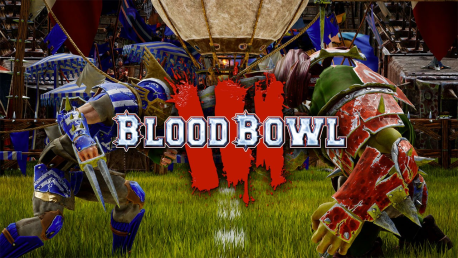 Put on your cleats, buckle on your helmet, adjust your shoulder pads and breast plate… and (discreetly) tuck a sharp dagger into your belt. War disappeared in the Old World when the inhabitants decided to resolve their differences by playing the god Nuffle's sacred sport: Blood Bowl. And yet it is...

Be ready to play Blood Bowl III (3) on release day! When you preorder, the payment will not be charged until the order has been delivered. Your product key will be sent on release day at the latest, but usually 1-2 days before.

Put on your cleats, buckle on your helmet, adjust your shoulder pads and breast plate… and (discreetly) tuck a sharp dagger into your belt.

War disappeared in the Old World when the inhabitants decided to resolve their differences by playing the god Nuffle's sacred sport: Blood Bowl. And yet it is no less bloody than the battlefields it has replaced. Murder, mutilation, cheating, corruption, sorcery and even divine intervention come one after another on the pitch, to the delight of everyone watching!

Merciless, not brainless – Take charge of a team from amongst the 12 available races, each with unique characteristics, and stop your opponents from advancing by carefully positioning your players. Dodge or mercilessly eliminate whoever gets in your way and reach the end zone to score the decisive touchdown! Naturally, the best strategists should have an edge, but... who knows? A rampaging troll might eat a teammate and change the course of a match.

You're the boss – Create your team, recruit your players, customize their appearance, emblems and armour, recruit cheerleaders and a coach, then take part in the most ferocious competitions in the Old World. But beware: injuries are commonplace, and it's more than likely that some of your players will be carried off the field in a body bag, bringing a definitive end to a once-promising career…

An agent has noticed your skills as a coach and decided to finance you and your team, so you can participate in a new Blood Bowl event: the Clash of Sponsors. Will you be able to demolish your opponents and win over the spectators?

In addition to the campaign and friendly matches against other players or the AI, Blood Bowl 3 has a brand-new competitive mode which lets you compete against players of all levels, from around the world:

How does it work? Will I receive Blood Bowl III (3) as a physical copy?

What does Blood Bowl III contain? Will I receive the same content as on Steam?

You will receive the standard edition of Blood Bowl III as a digital download for Steam.