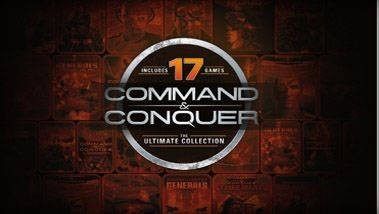 Are you ready for the ultimate real-time strategy experience? Gather resources, build your base, and create the most powerful armies in the world before engaging the enemy in all-out war. Fight as the Global Defense Initiative or the Brotherhood of Nod as they clash over the rare mineral Tiber...

Are you ready for the ultimate real-time strategy experience? Gather resources, build your base, and create the most powerful armies in the world before engaging the enemy in all-out war. Fight as the Global Defense Initiative or the Brotherhood of Nod as they clash over the rare mineral Tiberium in the classic original series. Challenge the red menace in an alternate universe in Red Alert, then step into the near future with Generals as China and the United States battle the Global Liberation Army, a terrorist organization hell-bent on bringing the world to its knees. However you play, you’ll enjoy limitless hours of RTS Command & Conquer gaming with 10 base games and 7 in-depth expansion packs.

Note: GameSpy ended all hosted game services in 2014, which affects the online multiplayer aspect of one or more games in the collection.

Engage in intense, strategic battles. Make the most of every move as you order soldiers, vehicles, and aircraft across large maps filled with enemies, traps, and mission-critical resources. Move single troops, select small groups, or issue a unified attack order to all allies as you work to defeat the opponent.

Collect, create, conquer. Success in battle requires more than just a keen battle strategy. Fight for control as you struggle to collect the resources necessary to build new bases, troops, and weaponry, all while keeping the enemy at bay.

Command and Conquer everything. Explore the wide range of Command & Conquer games and fight every war from both sides! Rediscover the epic conflicts across two decades of gameplay. Take a first-person view of the C&C universe through Command & Conquer: Renegade – the series’ one and only first-person shooter – or start playing from the very beginning and enjoy the frenetic style of combat, immersive strategy and campy banter that launched a generation of strategy warfare games.

How does it work? Will I receive Command & Conquer The Ultimate Collection as a physical copy?