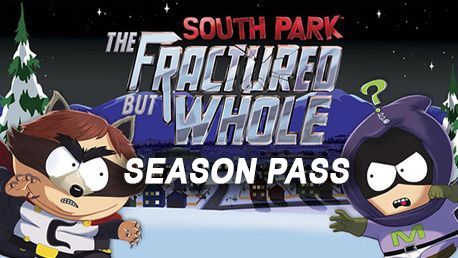 NOTICE: Requires the base game South Park: The Fractured but Whole in order to play. Activation key must be used on a valid Uplay account. Requires internet connection. NOTICE: The activation key only works in Europe, Africa, Middle-East, Oceania, Japan & ...

NOTICE: Requires the base game South Park: The Fractured but Whole in order to play. Activation key must be used on a valid Uplay account. Requires internet connection.

The Season Pass gives you access to new adventures, new buddies, and additional items including the "Relics of Zaron – Stick of Truth Costumes and Perks" pack, to pay homage to the epic war waged for the Stick of Truth.

From the creators of South Park, Trey Parker and Matt Stone, comes South Park: The Fractured but Whole, a sequel to 2014's award-winning South Park: The Stick of Truth. Players will once again assume the role of the New Kid and join South Park favorites Stan, Kyle, Kenny and Cartman in a new hilarious and outrageous RPG adventure.

In South Park: The Fractured but Whole, players will delve into the crime-ridden underbelly of South Park with Coon and Friends. This dedicated group of crime fighters was formed by Eric Cartman whose superhero alter-ego, The Coon, is half man, half raccoon. As the New Kid, players will join Mysterion, Toolshed, Human Kite and a host of others to battle the forces of evil while Coon strives to make his team the most beloved superheroes in history.

How does it work? Will I receive South Park: The Fractured but Whole Season Pass as a physical copy?