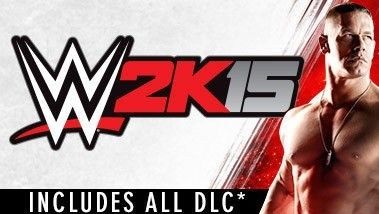 WWE 2K15  ushers in a new era of WWE video games!  WWE 2K15  brings the hardest hitting and most fluid WWE gameplay to date, closer than ever to what fans see on WWE TV. With significant gameplay enhancements, a presentation overhaul, and all-new MyCAREER and 2K Showcase game modes, <...

WWE 2K15 CD key to be activated and downloaded via Steam. You will not be sent any physical items in the mail. You will receive a(n) Steam product key via e -mail.
WWE 2K15 (PC) 40,80 €
Du får 0 Playcoins Earn PlayCoins every time you shop with us.
Stock agent

WWE 2K15 ushers in a new era of WWE video games! WWE 2K15 brings the hardest hitting and most fluid WWE gameplay to date, closer than ever to what fans see on WWE TV. With significant gameplay enhancements, a presentation overhaul, and all-new MyCAREER and 2K Showcase game modes, WWE 2K15 delivers the most authentic and action-packed WWE video game experience to date.

Feel every blow, hear every impact. WWE 2K15. Feel It.

Includes every single piece of downloadable content*:
Immediate access to Playable Hulk Hogan and Hollywood Hogan:
What’cha gonna do when TWO versions of Hulk Hogan run wild on you? Receive ”Hollywood” Hulk Hogan, as well as the classic red and yellow Hulk Hogan.
Immediate access to Sting Playable Characters Pack:
For the first time EVER in a WWE ring, It’s showtime! Receive two versions of the legend Sting! Play as blonde-haired retro Sting clad in neon colors, or as the intimidating silent warrior that battled the nWo!
WCW Character Pack*:
During the Monday Night Wars, WCW dominated WWE for 83 straight weeks. Relive the Monday Night Wars with five of the toughest legends from WCW – “the Belfast Bruiser” Fit Finlay, Lord Steven Regal, "the Beast from the East" Bam Bam Bigelow, Diamond Dallas Page, and "the Total Package" Lex Luger, all in one add-on pack. WCW...Where the Big Boys Play.
NXT Arrival Character Pack*:
Play as some of the brightest Superstars to ever step foot in an NXT ring with the all new NXT ArRIVAL pack! The future starts now with playable NXT characters such as Adam Rose, Konnor and Viktor of The Ascension, NXT Diva Emma and Former WWE Champion and Monday Night Raw Announcer JBL!
New Moves Pack*:
Gain access to over 30 new moves to add to your arsenal with the WWE 2K15 New Moves Pack add-on! Perform exciting new moves like Uso Crazy and the Spinning Powerbomb, as well as variations of Bray Wyatt’s Sister Abigail and Cesaro’s Gutwrench Suplex.
Accelerator*:
Decide the overall rankings and attribute levels of every WWE Superstar, Legend, and Diva in the game. Unlock every WWE Superstar, Legend, and Diva, including alternate attires and all arenas and championships in WWE 2K15.
Showcase – One More Match*:
Relive the heated Randy Orton and Christian rivalry with hours of new 2K Showcase action in One More Match! Battle through epic matches as their story is told through your gameplay and historical WWE footage. Also get playable WWE Superstars from 2011: Christian, Randy Orton, Edge, Mark Henry and Sheamus and 2011 arenas: SmackDown, Extreme Rules, Over the Limit and Capitol Punishment.
Showcase – Hall of Pain*:
World’s Strongest Slam your way through the competition in this new WWE 2K15 2K Showcase Hall Of Pain! Relive Mark Henry’s rise to dominance from 2011-2013 through classic WWE footage and bone-crushing matches. Unlock new historical versions of Mark Henry, Big Show, Kane, The Usos, Sheamus, The Great Khali and more! Also receive playable arenas such as Vengeance(2011) and WrestleMania 29.
Showcase – Path of the Warrior*:
Feel the power of the Ultimate Warrior with the WWE 2K15 “Path Of The Warrior” 2K Showcase! Relive his career through historic WWE footage and receive playable legends such as: Ultimate Warrior, Hulk Hogan, André the Giant, Sgt. Slaughter, Macho King and more!. Also receive playable arenas such as: WrestleMania VI, VII and XII; SummerSlam®; Saturday Night’s Main Event and Madison Square Garden.
*Does not include Paige. Some Content will be available via free download, Spring 2015.
FREQUENTLY ASKED QUESTIONS

How does it work? Will I receive WWE 2K15 as a physical copy?